Mikey McCue was a performer at heart; she studied classical voice and stage craft when she was young. When she found herself unable to sleep while living in New York City, she discovered yoga. Mikey was instantly hooked and became a student of Hatha, Ashtanga, Vinyasa, Bikram, Tai Chi, and Qi Gong. Whatever she could find. This discovery led her on a journey that culminated in 2011, when she discovered Kundalini yoga and was finally called to teach and received her certification at the world-famous Yoga West.

Mikey studied with many esteemed teachers, including Guru Singh and Krishna Kaur Khalsa.

Kundalini is a blend of breath work, Kriya (or Asana as it is known in other forms of yoga), deep relaxation and meditation. Frequently including chanting. The overall effect is one of wellness, positivity, mental well-being, and physical strength. Kundalini is here to help us move through the dance of life with grace, so we can enjoy it! 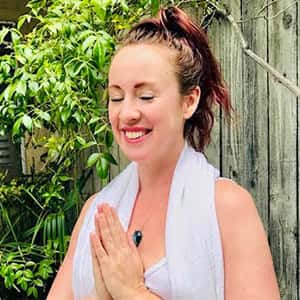